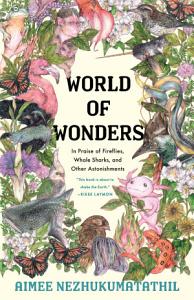 i just finished a book of essays called “world of wonders” by aimee nezhukumatathil, where she connects memories of her life with natural elements like obscure creatures or trees or no-so-obscure creatures. her childhood was a quiet one in the 80s, so her experiences she shared were relatable, but from a different lens of a first-generation non-white child. but what this book really shines in is the lyricism of the writing. she’s firstly a poet, is my understanding, and you can tell that by the way she weaves her prose. her writing reminds me of michael perry’s, in its leaving you wanting for a time that’s gone by.

the book is short and a quick read, and several essays are illustrated by the natural world she makes connections with. i have a hard cover copy that i will gladly lend to anyone.

speaking of the 80s, i read the book “we ride upon sticks”, which was a recommendation from another blogger, and it was the opposite of the collection of essays, but equally reminiscent of the 80s. the pages were dense, with text crowding the page in a small size and one paragraph taking up a page a times. but after i got into it, i definitely got engrossed with this book. it features a field hockey team in the late 80s in a town outside of salem, and they make a weird pact through emilio estevez and witchcraft, though, actual witchcraft, or just the knowledge that they were in this together? either way, i was constantly reminded of things that happened in the 80s that i had decided didn’t need to take up space in my brain anymore. specifically, gitano jeans, which produced such a rush of nostalgia, i couldn’t help but gasp when i read it in the book.

this book is not necessarily short, and not a quick read. there are no illustrations, but i think if you want a rush of 80s nostalgia and a plotline that is nothing like anything i’ve ever seen before, then pick up this book. i think the last page and a half are worth the entire read, and i was smiling hard as i finished it up.

This site uses Akismet to reduce spam. Learn how your comment data is processed.